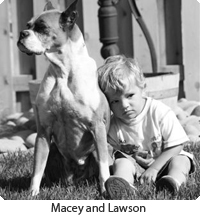 Growing up on a farm in Southern Iowa, Dr. Mendez is all too familiar with animals of all sizes and has been involved in the field of veterinarian medicine since the minute she could get her foot in the door of a clinic at the age of 15. It is her love for helping people and animals that drew her to the profession. She received her Bachelor of Science degree in Animal Science from Cal Poly, San Luis Obispo, and graduated Cum Laude from Kansas State University with her Doctorate in Veterinary Medicine. Meeting her husband at Cal Poly, Larry (a fifth generation Lompocian), they naturally settled in the Lompoc Valley to raise their family. They purchased Animal Care Hospital in January 2008, and she quickly emerged herself in the community becoming involved in many local organizations. Dr. Mendez spends her free time with her husband, two children, Lawson and Emery Rose. As a family, they enjoy spending time water skiing, snow skiing, and camping with friends. Her pets include 2 dogs, Izzy and Oliver; 2 cats, Deuce and Tiger; 2 horses, Gunner and Woody; and many cows. 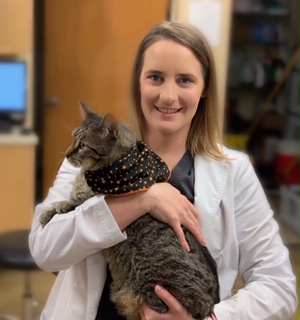 Dr. Rachelle Axline was raised in the small town of Quincy in the Sierra Nevada mountains. Craving warmer climates, she moved to the central coast for undergraduate studies. She attended the University of California Santa Barbara, where she studied Biology and Psychology. During that time, she began volunteering with a variety of animals including cats, dogs, sea lions, sea birds and even elephants and giraffes at the zoo. She also began working at a local pet clinic which further developed her passion for animals. She was soon admitted to the University of California Davis School of Veterinary Medicine and received her Doctorate of Veterinary Medicine in 2012.

After graduating, Dr. Axline underwent an additional year of extensive training through the internship program at Animal Specialty & Emergency Center in West Los Angeles. It was there that she was exposed to a variety of complex cases and further developed her skills in critical care and emergency medicine.

Dr. Axline was happy to return to the central coast following her internship. While working in Santa Barbara, she met her husband, a Lompoc local. Dr. Axline was fortunate enough to join the team at Animal Care Hospital in December of 2014. When not at work, she can be found enjoying the outdoors spending time with her husband, 2 dogs, and cat.

Dr. Jessica Scherr is originally from Great Falls, MT where she grew up following her veterinarian father around the clinic. From a very young age, she knew where her passion was and pursued her career by attending Concordia College in Moorhead, MN where she earned her Bachelor’s degree in Biology and Chemistry. After graduation, she worked in a number of veterinary clinics, further fueling her passion. She then went on to receive her Doctorate of Veterinary Medicine from Washington State University in May of 2018.

After graduating, Dr. Scherr worked in a mixed animal practice in Rigby, Idaho doing a variety of medical and surgical procedures while enjoying working with an assortment of animals. She also volunteered with the local animal shelter performing spays and neuters and helping animals in need. Dr. Scherr is eager to join the Animal Care Hospital team and is excited about adventuring California’s central coast. In her spare time Dr. Scherr and her dog, Ferdinand, enjoy hiking, camping, kayaking, and playing soccer.

Cameron has been working at Animal Care Hospital for 1 year, and is currently working towards becoming an RVT. She has three pets; her two dogs Bubba and Mack, and her cat Phil. During her time off, she enjoys going on adventures, traveling, and taking her dogs to the beach.

Brian has worked for Animal Care Hospital for 15 years but has been caring for animals for most of his life. As a child he helped his older brother maintain a freshwater aquarium, a hobby he adopted himself when he was old enough. He also helped with the Cabrillo Aquarium in the facility’s early stages, which lead Brian to acquire a job at Pet Paradise of Lompoc. During the fifteen years of working at Pet Paradise he was exposed to many types of animals and their care and worked there until the owners retired. As a hobby, Brian currently has a large collection of Day Geckos that he breeds and enjoys. In his spare time he likes to cycle and is a current member of the Lompoc Valley Bicycle Club, Village Dirtbags, and Lompoc Valley Distance running club. Brian loves the people he works with and caring for their client’s furry family members at Animal Care Hospital.

​Growing up in this beautiful small town of Lompoc, Michelle has always had a passion for animals and the medical field. She previously worked as a certified nurse assistant, but is extremely excited to explore the veterinary field as she has always wanted to as a little girl. Currently, she is attending Alan Hancock College working towards her RVT license. She is a fur momma to one handsome maltipoo named Randy. On her free time, she enjoys going to the beach, hiking and hanging out with friends and family, especially Randy.

Having worked in the veterinary field since 2007, Kristina has shifted in various aspects from kennel to reception and technician. Hailing from the city life of San Bernardino, she came to Santa Barbara for schooling. She has lived in Lompoc for over 7 years with her fiancé, their border collie, Albus, and three cats, Nina, Donovan and Mayuri.

​Cristina (known as Tina by friends and family) was born and raised on a ranch here in Lompoc. Working with animals has always been in her nature growing up. She has been with the Animal Care Hospital team since October of 2015. In her spare time, she enjoys heading to the park with family, and getting manicures with her sisters.

Although this is Jordan’s first year in the veterinary field, she grew up with a variety of animals from cats, hamsters, bunnies and chickens. Currently she has 2 cats, siblings Teddi and Armani. She recently graduated from Lompoc High School and is attending Alan Hancock hoping to transfer and get a degree in Biology. In her spare time she likes bonfires with friends, watching sunsets and having movie nights with friends and family.

Since a very young age, Taelor has always had a strong love for animals. After graduating from Colorado State, Taelor moved to the central coast to pursue a career in the veterinary field. Currently, she is going to school to become a veterinary technician. In her spare time, you can find her at the barn with her horse training for shows.

Irene has been working at Animal Care since September. She has always loved working with animals.

Isaiah was born and raised in Lompoc with a strong connection with animals ever since he was young. He has grown up around a variety of animals such as chickens, cats, dogs, pigs, rabbits, and currently has 3 dogs, 2 fish and a pet hamster named Apollo. Animal Care Hospital is Isaiah’s first job. He says it has led to so many eye-opening experiences and has become a second family for him. Isaiah plans on transferring from Allan Hancock College to a four-year university in hopes of getting a Bachelor’s degree in Business Administration. In his spare time, he likes to shop, eat and relax.

Originally from Santa Barbara, KJ has lived in Hawaii and Seattle. She grew up with cats and bunnies and has worked on a ranch at a dog rescue where she fell in love with dogs, goats, cows, pigs and all other farm animals. In her off time, she loves snowboarding and rock climbing and playing beach volleyball. She is currently in the vet tech program at Allan Hancock.